Coping with Non-Vegan Relatives During the Holidays

According to psychologist Melanie Joy, PhD, “Carnism is the invisible belief system, or ideology, that conditions people to eat certain animals.” It’s basically the opposite of veganism.

If you’re a vegan teen, you’re likely to be spending the holidays with many carnist relatives. Some may not know you’re vegan yet, and you don’t know how they’ll react. Or they may know you’re vegan but aren’t supportive—or worse, make mean and insensitive comments or jokes about it.

Here’s a short guide on being a vegan teen in an extended family of non-vegans without letting it ruin your holiday spirit!

Dr. Melanie Joy has a great video on advocating for veganism effectively that you should really watch. If you don’t want to watch the whole thing, skip to 49:40 to hear her advice.

The following suggestions are taken from that video, suggestions from my awesome VeganTeen advisors, and conversations with other vegan teens about what really works for them.

Just Surviving May Be Enough.

Some families mean being the only vegan in a hostile room of meat eaters. Veganism means exploiting animals as little “as far as is possible and practicable.” As a teenager, you have less control over your life than vegan adults. Extreme family pressure or even threats can force us to stay silent about our veganism. Sometimes, they even make consuming some animal products the only way to get through the day. Most families are not this hostile towards veganism, but some really are. You may need to define success as just getting through the day so you can be a mentally healthy teenager who advocates with nonvegans who have open, compassionate minds—not closed, angry and threatening ones forcing you to eat with them.

Forgive Yourself in Advance.

Commit to forgiving yourself if you don’t always think of the brilliant thing to say in the moment, if you lose your cool, if you retreat into silence, or if you deflect and change the subject. Agree to forgive yourself if you end up eating an animal product because pressure from adults makes it too difficult to be vegan in these high-pressure circumstances. It is true that the animals are counting on us to advocate for them, but these are complicated skills, and we may not always get it right. If we screw up, we just have to try to do better the next time or the time after that. We are all learning and growing as vegans and as people.

Plant Seeds, Because Holidays Are Not a Time to Argue.

Even if your family generally supports or tolerates your choice to live a vegan lifestyle, some family members may try to argue or tease you. Resist the urge to return fire with fire. Make your goal simply to get non-vegans to reflect on their choices. Just your shining presence as a member of their own family will prove veganism is a healthful option. You are planting seeds of change through your words and example. If you attend holiday get-togethers expecting anyone to go vegan or admit that you’re right (and they’re wrong), you’re probably going to be very disappointed.

Visualize Great Moral Leaders by Your Side.

Imagine the first suffragettes in their families being told at holiday dinners that letting women vote “will turn women into men.” (Yes, people really made that argument.) Think about the first abolitionists in their families sitting through a table of relatives agreeing, “It’s natural that some people are slaves.” (Yes, people really said that too.) Imagine your favorite great moral leader in history sitting by your side, rolling their eyes at any unsupportive comments you get. Visualize them saying, “Yep. This is how people react to new ideas. Let me tell you the kind of stuff my relatives said to ME!”

However, don’t tell your relatives about how veganism is like other great social movements, or you will seem arrogant. This is just a mental trick to help you cope.

Unless you’re very lucky, you were probably once a carnist too. If people ask you why you’re vegan, here’s some steps to follow based on Dr. Melanie Joy’s advice.

Step 1: Remind relatives who are treating you like an alien life form that you also once ate animal products, just like they do.

Step 2: Share honestly about any defenses you had. Maybe you didn’t want to hear vegans tell you about farmed animals. Perhaps you thought vegans seemed arrogant or preachy. Did you worry that being vegan would limit your food choices or ability to fit in socially? Your relatives can probably relate to the defenses and concerns you once had.

Step 3: Share with them a few key points about what made you finally go vegan.

Step 4: Say you felt it was necessary to go vegan because it best reflects the morals you’ve set for yourself. 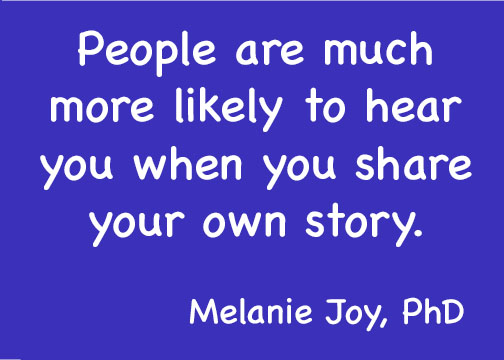 Know Your Crowd & Pick Your Timing.

Maya Angelou once said, “I’ve learned that people will forget what you said, people will forget what you did, but people will never forget how you made them feel.” Unless your family is especially open-minded, facts about piglet castration or turkey slaughter at the dinner table probably won’t be remembered. What people will remember is you shaming them. This will give them a negative impression of vegans and veganism. Shame may be deserved sometimes, but shaming is not an effective way of influencing people. Do you want to be right, or do you want to be effective?

“Don’t Expect the Truth to Sell the Ideology.”—Melanie Joy, PhD.

Melanie Joy points out that we vegans aren’t just asking for a shift in behavior but a whole shift in consciousness. Vegan is a shift in how people see the world and themselves. We’re asking people to “take in the truth of animal suffering,” which changes them forever. Facts aren’t enough. People have to be psychologically, socially and realistically able to make this shift.

See Carnists as Victims, Not the Enemy.

Our culture is so carnist that we eat animals so far in excess that it’s killing us by the millions. Animal products are a major contributor to leading killers like heart disease and possibly even terrible diseases like Alzheimers.  Have compassion for how the carnist ideology blinds your relatives to the point they may become sick, disabled and even die from their inability to stop seeing the truth about cheeseburgers, bacon and sausage. Visit a nursing home and see suffering people disabled by heart disease, strokes, and diabetes. You can’t influence people positively if you see them as the enemy. Have compassion for all victims of carnism, human and animal.

Model Being Open, Reflective and Compassionate.

If you want non-vegans to be open to your ideas, reflective about their choices and compassionate towards you and the animals, then model that towards them. Some may say closed-minded, mean-spirited relatives don’t deserve this. But you won’t make them any better people by returning fire with fire. And you also won’t look like the better, more reasonable person in the eyes of more open-minded relatives who are watching how you deal with mean-spirited comments. It really sucks being the better person when someone is insulting you, but try your best to do it for the animals.

Use the Power of Any Comments—Even Mean Ones—About Veganism to Your Advantage.

As they say, there’s no such thing as bad publicity! Anytime someone says something derogatory, use it as an opportunity to offer additional information in a friendly, upbeat way.

Keep the end goal in mind of getting carnists to reflect on their choices and planting seeds of change. Repeated exposure to new ideas is how people get used to them. Once ideas are familiar, they are less threatening. Then people are able start taking them more seriously.

Separate the Person’s Character from their Behavior.

“Good people do bad things, and it doesn’t make them bad people.” — Melanie Joy, PhD. Dominant ideologies can cause good people to be blinded to the truth. Most are unable to dramatically shift their whole worldview after just a few conversations. When an ideology like carnism is this widespread, Melanie Joy suggests seeing contradictions as just part of life.

Maybe your grandma will have paid someone to kill an animal so she can cook its carcass. But she is still the same grandma who always remembers your birthday and is kind to other people. Your carnist uncle may have attitudes about animals you detest, but he is still someone who you respect on other matters. If you think a carnist relative has an overall good character, don’t let your veganism get in the way of loving them and enjoying your time together. 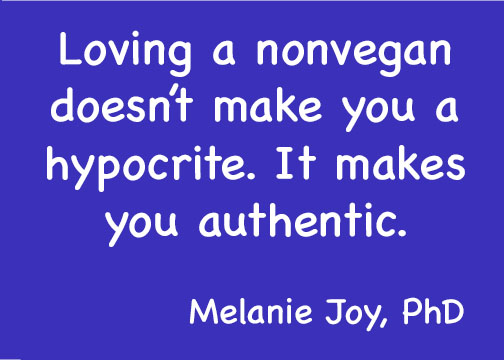 If you have a vegan friend, maybe you can break away to call or text for support, encouragement or advice when it gets difficult. See if they will be available during your family event. If you don’t have one, make sure you have joined a Vegan Teen Facebook group—there’s several ones—in advance so you can post in order to receive support. Another option is to create a Reddit account in advance and post on the vegan subreddit. Most of the subscribers are adults, but they will usually respond quickly to offer support to other vegans.

Remember to Forgive Yourself & Don’t Put the World on Your Shoulders.

All you can do is your best. If you lose your cool, or if you think of great things you should have said to your relatives the next day after everyone’s gone, forgive yourself. Use the experience to be a better advocate next time. Other advocates may make it look easy, but most have had a ton of practice talking to people about veganism.

You’re not a failure if your family get-togethers didn’t go as well as you’d have liked. Trying is success! You’re courageous to model a different, compassionate lifestyle.

If, sadly, your family was so hostile that you ended up eating some animal products, forgive yourself for that. You will be in a much better position to live your values when adults have less control over your life. Sometimes, just surviving with your sanity under hostile and/or threatening family circumstances is enough.

Look on the bright side: You didn’t have to argue with anyone this holiday about whether women should be able to vote or people should be enslaved, did you? Did you have to ask anyone to stop smoking at the dinner table? Did you have to argue with any of your family members saying gay people should be put in jail for being gay? It’s at least in part because, many years ago, some brave suffragette, abolitionist, non-smoking, or gay rights ancestor had the same kind of frustrating holiday family get-together that you just did! And when people made negative comments or argued with them, they probably felt just as hopeless and ineffective as we vegans often do today.

Isn’t it great that you have your family thinking about veganism? Without you, veganism probably would be the last thing on their mind during the holidays. Any negativity you get is just the cost of introducing new ideas. You are awesome to be willing to pay that cost.

Being willing to pay the cost of being different is changing the world. Interest in veganism is growing, with more celebrities and athletes embracing plant-based diets and veganism all the time.

Together, in big ways and small, we are making a real difference and saving lives. 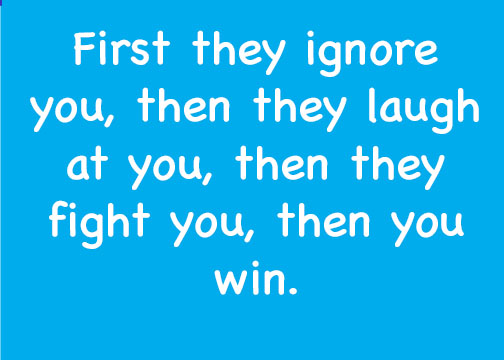