In 2017, Los Angeles Unified School District became the first public school district in the nation to vote in a mandatory vegan school lunch option for students every single day of the school year.  Lila Copeland, the teen founder and director of the non-profit Earth Peace, and a posse of vegan students she gathered for support, pulled it off after two years of hard work!

How old were you when you founded the Earth Peace Foundation, and what inspired you?

I was in 5th grade, so I was about 11. (I’m 17 now.) As an animal rights activist basically from birth in a then-vegetarian family, I always had an awareness of what everyone around me was eating. I went vegan at 11, finally dropping eggs, and I just couldn’t take sitting in silence anymore.

I was bullied for being vegan. People waved chicken nuggets in my face and did other things like that, so I started the Earth Peace Foundation. Earth Peace’s activities began with discussion forums in schools and clubs around So Cal [Southern California], where I talked about animal agriculture and what we know as the most dangerous animals on earth: humans.

What is the Healthy Freedom Campaign?

The Healthy Freedom Campaign is a vegan school food campaign seeking to mandate a fully vegan meal option for every public school student in California, every day of the school year.  It’s based on freedom for individuals to change—with food choice—a system that causes irreversible damage to our planet, bodies and ethics.   We are happy that Los Angeles (LA) Unified [school district] has adopted the plan (as of 2017) and is still scaling to all 1,000 K-12 schools. It’s time for California students to have the same right to access vegan choices as the prisoners and hospital patients in our state. 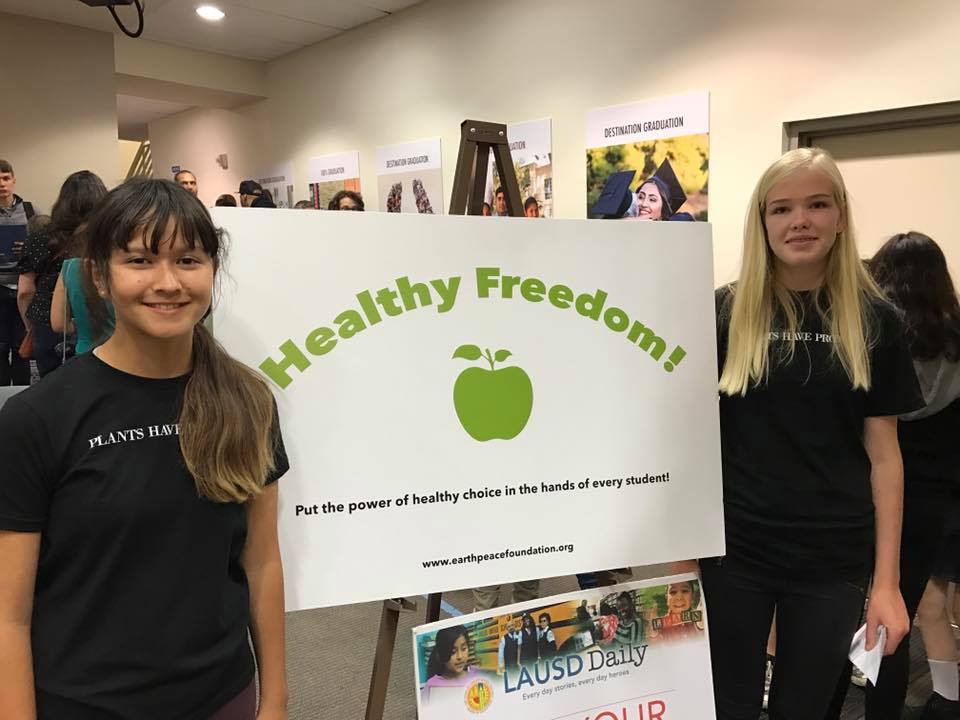 Lila Copeland, Kohana Porter with the Healthy Freedom Sign at a board meeting.

How did you start the Healthy Freedom Campaign?

I started calling people for support in 2014. I received so may no’s, but I just kept going. I was taught not to take no for an answer.  After I got one person to say yes after about a year of knocking on doors by myself, I started to campaign the Board of Education—and to my huge luck, it had a vegetarian and Jewish Board President at the time who loved the plan. It’s significant that he is Jewish, because vegan meals are kosher, and the Orthodox Jewish community with kids in public schools have no meal choice without a vegan option. We are thrilled to have their support in the campaign.

How did you find support for the campaign from Dr. Neal Barnard and other celebrities in the vegan community?

I kept knocking, calling and asking. In many cases, I traveled to the offices of people’s agents. I got more than 100 no’s.

I only reached out to Dr. Barnard when we were poised for the school board vote, and he came out and spoke to the Board on the day of the vote.  Pam Anderson came as a result of 100 asks; others said no—but she said yes.

Pamela Anderson and Lila at the Healthy Freedom campaign kick off June 2016 .

When I finally connected with the people who said yes, it was because they are passionate about student health and educating about veganism in schools. Torre Washington bailed on an international engagement to fly to Los Angeles (LA) to support our kick-off event; he is just passionate. You could not have a more amazing person. Fiona Oakes flew to Los Angeles from London on her own dime (we put her up in the hotel); she left all her 200 animals on her sanctuary to come and make it happen for the students of LA.

People will say no due to their allegiances with cliques; it’s part of what holds us vegans back as a group. But in the end, all the right people showed up, and it was ideal in every way.

Dr. Michael Klaper making his speech to the board at LAUSD June 2016.

Were there times during the campaign you felt like it wouldn’t succeed?

Yes, I did feel that way sometimes, solely based on the school district’s level of bureaucracy.  Once we had a student coalition, we got smacked down all the time.  After the resolution was passed, we were still in there all the time trying to keep it going and scaling. Then there was a massive turnover on the board and in the superintendent’s office. Michelle King was a huge loss to us, as was the Board President. But we kept going; we kept showing up.  You have to just keep showing up over and over. It never ends.   We students always made speeches at Board meetings, but the board members were not listening to us. One time, we smuggled in a banner—which was contraband—and we unfurled it. All of us students just stood at the podium for 2 minutes, holding our banner and looking into the eyes of each Board member in silence. It was the most powerful moment of the campaign.

What was/were the hardest part(s) of doing the campaign?

When I was alone getting it started, it was hard. When I had to give up surfing for weekends a lot of the time, it was hard on me. You have to give up a lot of your time, and your life is not your own for a while. There also were vegan factions trying to shut us down and tear us apart the whole time, and that was hard on me too. It was like intense bullying from adults who just didn’t want to see me succeed—or for our campaign to work. That was very hard.

What was the most surprising part?

The most surprising part is when we got the Board vote in our favor. I knew that we would never give up and might spend 20 years fighting for it, but when we got it in May 2017, I was bowled over. The same will be the case when the State of California passes the law.

I just want to say that, without Board President Steve Zimmer, we would not have won so soon. 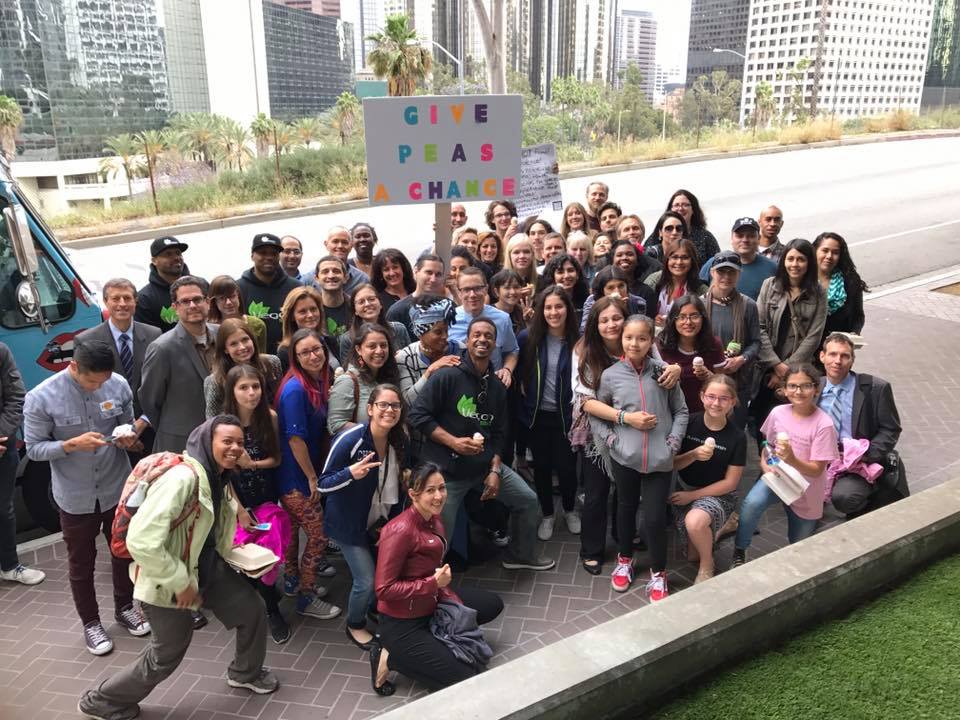 Group of supporters moments after the yes vote at LAUSD May 2017.

Los Angeles is already pretty vegan-friendly compared with many other U.S. cities. How much do you think that helped?  Do you think your success could be replicated other places in the U.S.?

We vegans have plenty of restaurant options in Los Angeles—but we are not a vegan city and maybe not even vegan-friendly.  Only 1% of people in LA are vegan.

I went to food tests in some LA schools, and none of the students even knew: (1) what the word vegan means, or that (2) you can actually buy veggie burgers at Vons [grocery store]. After testing a veggie burger in a school cafeteria, a girl once asked me, “Can you get veggie burgers at the supermarket?” We face tremendous challenges and resistance. Every victory is a step forward.

I believe our success will be replicated in other states. We need a nationwide coalition of students demanding vegan meal options. If students don’t care about the animals, we need those who care about human health and the climate crisis. I think we can look forward to a national mandate within in the next 6 years when a new U.S. president is in office and the senators now grappling with radical change have had a bit more time. Among our many activities, Earth Peace is lobbying for the end to animal agriculture to be stated in the Green New Deal—something it currently does not embrace. Without that piece of the deal, there is no Green New Deal.

How have you remained active in the effort after you achieved your initial success?

I work on this every day.  Earth Peace just won a national award from the Environmental Protection Agency for our Healthy Freedom Campaign.  I expect my post-college career to revolve around this issue.  We are gathering more doctors and more supporters, and we are coming for California.

What advice would you give other vegan teenagers who want to start such a campaign in their own areas?

If you want vegan meal choices in your school district, you will need to compile a dossier of medical proof that it’s most sound for kids on a health level. You need to learn how to find your ally on the school board.  You can consult our website for doctors who will help you if they have time. Science on the health is all the bureaucrats will really listen to. Get ready to show up publicly over and over and over; it never ends.

Then you have to get as many students as you possibly can to join your cause. This is something that cannot be achieved on your own; it takes a team of people who are willing to sacrifice. Most students are not able to sacrifice consistently, so expect them to come and go. Just keep moving ahead. When you have students there, make them aware every day of their importance and how valuable and vital they are. The things we are trying to change are monumental, and every person is needed to win.

Thanks to Lila Copeland for taking the time to be interviewed! Congratulations on her upcoming award this summer from the Environmental Protection Agency!